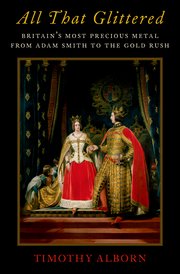 Reading with Timothy Alborn: All That Glittered Britain's Most Precious Metal from Adam Smith to the Gold Rush Online

From the early eighteenth century into the 1830s, Great Britain was the only major country in the world to adopt gold as the sole basis of its currency, in the process absorbing much of the world’s supply of that metal into its pockets, cupboards, and coffers. During the same period, Britons forged a nation by distilling a heady brew of Protestantism, commerce, and military might, while preserving important features of its older social hierarchy. All That Glittered argues for a close connection between these occurrences, by linking justifications for gold’s role in British society—starting in the 1750s and running through the mid-nineteenth century gold rushes in California and Australia—to contemporary descriptions of that metal’s varied values at home and abroad. Most of these accounts attributed British commercial and military success to a credit economy pinned on gold, stigmatized southern European and subaltern peoples for their nonmonetary uses of gold, or tried to marginalize people at home for similar forms of alleged misconduct. This book tells a primarily cultural origin story about the gold standard’s emergence after 1850 as an international monetary system, while providing a new window on British exceptionalism during the previous century.